The man with no name

Okay, so we've all seen this woman's face by now: 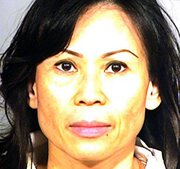 She's the lovely specimen who drugged her soon-to-be ex husband, tied him to a bed, waited for him to wake, cut his penis off with a kitchen knife. She then put it down the garbage disposal in order, one presumes, to eliminate any possibility of reattaching it.

When police arrived, she merely told them, "He deserved it." So what was his offense, that merited the amputation and destruction of his penis? Apparently, he filed for divorce.

And now, as he lies (possibly) recovering from near-death from shock and blood loss, he has become the punchline of a joke that began with Lorena and John Wayne Bobbit. Filed for divorce? "That'll teach him," quips an audience member during a recent episode of CBS's The Talk. Followed by host Sharon Osborne's assertion that, though she's unaware of all the details leading up to the attack, "it's quite fabulous."

Now quick, all of you. Can anyone here tell me, off the top of your head, what Catherine Kieu's husband's name is? Don't know it? Huh. I must confess, I don't know it, either. And while this may indeed be simply because his name has been withheld (would YOU want to go through the rest of your life aware that everyone knows you have no penis?), watching this video by Angry Harry (who is actually a very calm and rational dude, as well as brilliant), I'm coming to realize that we as a society are perfectly content knowing nothing meaningful about this man.

Why is this? Because he's a man, and we are trained as a society to see "men" as something less than whole people? More and more, we view men through their usefulness to society (firefighter, soldier, crew member, miner), their wrongdoings (rapist, murderer, thief, robber), or through their relationships with women (father, brother, son, husband).

In the first case, we have no empathy for them because, as Angry Harry said so eloquently, they've been reduced from human beings to "human doings". In the second case, we view them through the lens of their victims, making it all to easy to distance ourselves from their humanity. And in the third, we view them through the lens of the women in their lives. Our empathy is for her, even if she doesn't deserve it. No matter how despicable her crime was, no matter how inexcusable, no matter how unwarranted, no matter how evil, her suffering is somehow more worthy of sympathy to us than his.

She deserves our understanding, our support, our pity. And what does her victim deserve? Who cares? It's not like he even has a name. He only exists to us through his role as "husband of the penis mutilator". His suffering is so abstract to us as a society, we can even feel comfortable laughing about it.

Somehow, I don't think the man's friends and family are giggling over this. I really don't.

In a recent discussion about why I believe in the causes of MRAs, I said these words:

And I think this is something that is utterly forgotten in the quest for ever more rights/privileges for women. That men are human beings unto themselves. If they're alive, they're not only someone's father/son/husband/wallet. If they're dead, they deserve a portion of the tears shed, not just the women who will have to live without them. They have value in and of themselves, not just a value that can be measured as a function of their usefulness or importance to women or society.

We've all heard the expression of common, progressive wisdom in that a society can be measured by how it treats its women.

And how it treats its men? If this was the yardstick we were forced to measure our society by, if it was one that even entered into the public consciousness, I'm pretty sure we'd be failing.
Posted by girlwriteswhat at 17:17