It's not quite time to put the Christmas curry on (we're having turkey tomorrow at my mom's), so I have a tiny window of opportunity to write a post thanking all of you for your support over the last year, wishing you all a Merry Christmas, and sending out a special thank you to "Kris Kringle", who managed to get this incredible gift to me: 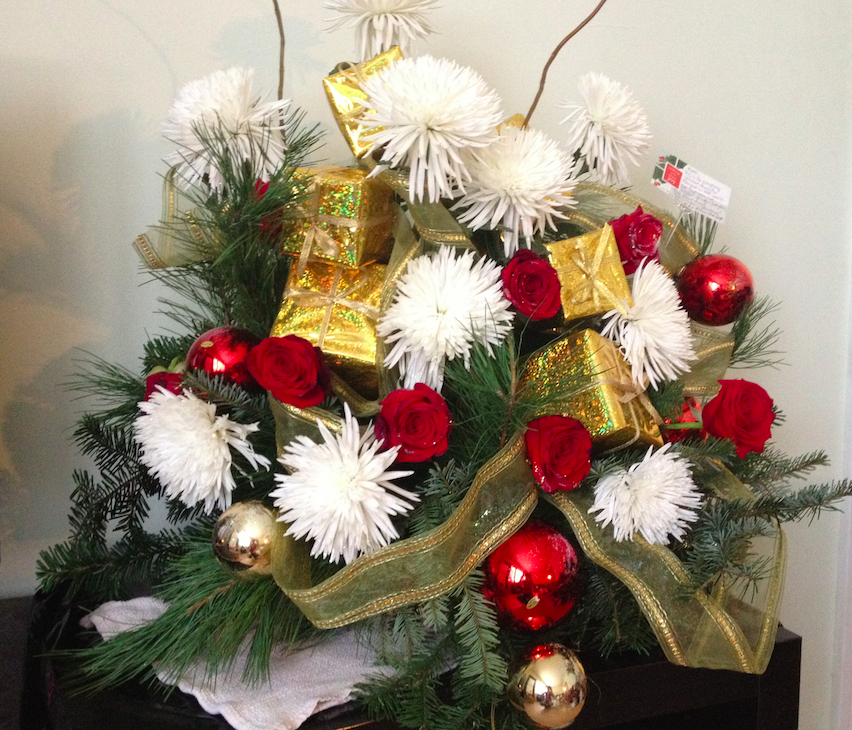 ...with only my name and phone number to go by. I picked it up at the florist's myself, and when I went in, the owner was on the phone, so her assistant helped me carry it out to the car. She said whoever it was who'd ordered the flowers was so effusive in his appreciation for what I do, the owner decided to make the arrangement herself, and the assistant asked me who it is that I help with my advocacy. I told her I help people that most people don't think need much help--that I talk about father's rights and male victims of domestic violence and things like that. She said that was awesome, and that her boyfriend had been in an abusive relationship, and everyone he tried to talk to about it told him it was his fault, or that he was the abuser.

As I was about to get into my car, the owner came running out in her shirtsleeves and gave me a hug, telling me that whatever it was I do, from what Mr. Kringle told her on the phone, I am obviously helping a lot of people, and...well, yeah. Mr. Kringle's real name remains a mystery, but I wanted to thank him for the wonderful gift, and for the almost more wonderful experience of picking them up and being hugged by the shop owner in the December cold of Edmonton because Mr. Kringle's words touched her so deeply.

So Kris Kringle, whoever you are, thank you. And thank you to the rest of you all for helping to keep me motivated and for all you do, in whatever way, to help turn things around for boys and men, and the women and girls who love them.

Posted by girlwriteswhat at 13:43 8 comments: