Dost thou protest too much? 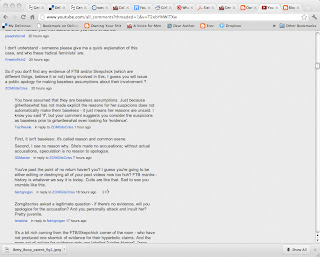 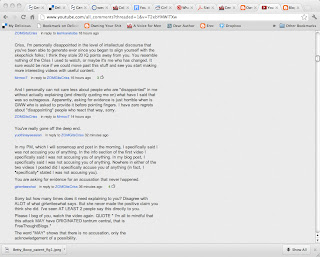 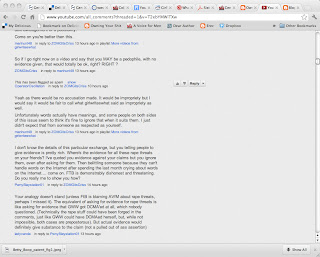 And I would be happy to provide evidence to back such accusations, if I'd actually made any such accusations. In fact, the only accusations I ever made regarding ZOMG is that she deleted my comments from the thread of her video. A cursory search for "neoteny" did not turn up my initial comment, nor other comments in which I had included this word, and I assumed, wrongly, that some or all of my comments had been deleted.

The instant I had ascertained that I was mistaken, I amended my video with a speech bubble, and posted edits on my blog post and the info section of my video to that effect. The edits in these two locations also included a disclaimer that I was not accusing ZOMGitsCriss of the attack on my channel, or of being personally involved in any of this. 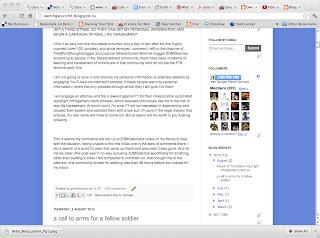 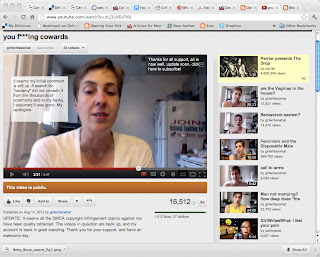 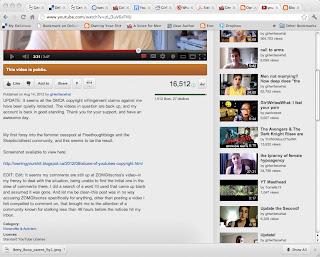 More than that, I exchanged a brief series of personal messages with ZOMG, in which I said to her:


I also want to make clear to you (I've tried to publicly, as well) that I don't at all believe this is your doing, but I do consider it very likely that this might be fallout from my participation in your video thread. This is the first trouble I've had on YT, and there's been some serious resentment among atheists/skeptics of thunderf00t subscribing to "the tokyo rose of men's rights".

If you like, here's a screencap of that message: 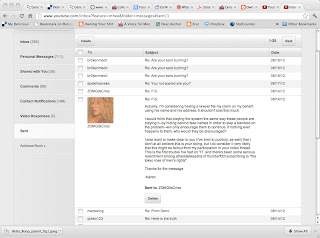 So what ZOMGitsCriss is demanding on my channel and (apparently) on twitter, and is criticizing me for not producing, is evidence of a claim I never made, and which I have conveyed in three places--two of them public and one of them directly to her--that I specifically was not making.

What I HAVE done is note that this attack on my channel--an attack that occurred the exact same day Justin Vacula was dealt a false DMCA claim against one of his videos--is something all too common within the Atheist/Skeptic community, that stalking has been an issue there as well, and that this attack occurred two days after I made my first foray into the increasingly feminist environment of that community. My channel has been pissing people off since last October, and two days after a comment of mine received 117 upvotes in a thread where ZOMG was downvoted 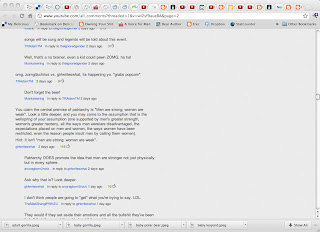 I get (allegedly) two claimants filing false DMCAs against me with the implied threat that my channel would go down if I don't provide them my personal details.

I'm well aware that it could be any number of people within the FTB or skepchick communities, or none of them, or all of them, or someone completely different. But as I said, the timing is awfully iffy.

Again. I did not accuse ZOMGitsCriss of anything. In fact, I went out of my way to say I was NOT accusing her of anything--both in public and in a personal message. Yet she demands evidence of my accusations that she is the culprit behind the false DMCA claims filed against me.

Of course, it's not like I'm not used to this crap. Here is a screencap of a post on FTB (apparently they've acknowledged my existence now): 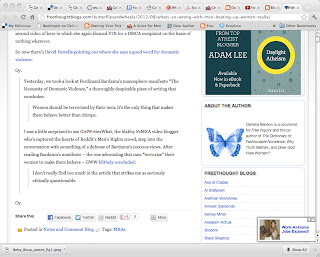 I'm going to allow that these people are unfamiliar with the MRM's general sentiment toward Ferdinand Bardamu, which is that pretty much everything he writes is expected to be so awful that we no longer even remark on the awfulness, but concentrate our discussion on the things he occasionally says that are NOT awful. But let's deconstruct this a little.

So here we have a group of people who claim I am accusing someone even after I have specifically and unambiguously stated, publicly in two places and privately to her face, that I am not accusing her, who then go on to impute beliefs and values on me based on the fact that I found some, but not all, of a Ferdinand Bardamu article ethically questionable.

The intellectual dishonesty, it hurts. It hurts SO BAD.


Posted by girlwriteswhat at 00:55