A tale of two shirts

In one corner of the internets, we have Matt Taylor, a lead European Space Agency scientist on the Rosetta project, who just the other day successfully landed a space probe on a comet travelling tens of thousands of kph, millions of kilometres from Earth. The engineering and planning required for this achievement has to be at least 100 billion times more complex than using the Canadarm to thread a sewing needle during a meteor storm. I've heard the level of difficulty was akin to that of successfully hitting a moving bullet with a laser beam.

He wore this shirt during his press appearances. 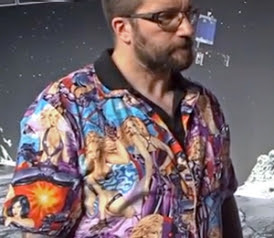 As you can see, it has some sexy ladies on it, sporting... ahhh... hunting gear. Needless to say, the feminist shit hit the fan.

Confirmed rumor has it that the shirt was hand-made especially for him by a female friend with a career in tattoo art. I suspect he wore the shirt to honor her, and possibly because he considered it lucky (oh the irony). Not really my cup of tea. But then, I still consider this MY lucky shirt:

Meh. No accounting for taste, especially among the nerd class. I'll leave it to you all to decide which is sexier--the rotting zombie head or the hot chicks with AK-47s. Either way, whether a nerd is going to show up for a photo op in a shirt like Dr. Taylor's, or something like this:

... I just can't bring myself to see a problem with it. While I would vehemently disagree with anyone who claims Kirk was the better captain (bastages, one and all), I defend their right to spread their folly and ignorance.

As far as Dr. Taylor's shirt goes, though its aesthetic isn't really my thing, I will say that sexy does not equal sexist. Yet this was the very claim made by many feminists since Taylor made the news--in fact, the #shirtstorm seems to have overshadowed his incredible, astounding, mind-boggling scientific accomplishment. Led by the usual suspects--the very journalists, pundits, Tumblrites and Twitterites who've been attacking geek culture and nerddom since Eron Gjoni uploaded the Zoe Post and sparked a geek revolt months ago--progressive feminist media pundits and shit-stirrers have deemed The Shirt sexist, sexually objectifying and ostracizing to women.

Worse than that, even.

Because it's not just a sexist shirt--its very existence is destined to make women feel unwelcome in STEM fields already filled with hostile male sexuality and rapiness (by unattractive geeks who wear glasses because they need them, not just for fashion, no less!). It's not just objectifying sexualized women, it's keeping ALL WOMEN in their place. Just like everything else this terrible Patriarchy creates, like meat and microchips, safety and servos, and space probes capable of landing on fucking comets.

(In fact, I'm forced to wonder why a MAN was chosen to be media spokesperson for Rosetta. Where are the female role models at the ESA? Fetching coffee for their patriarchal overlords, I would guess, during their breaks from toiling in the Sammich Mines. Why haven't any feminists complained about this? I shall dispatch a pigeon to the NOW forthwith demanding they add this complaint to their charter, just to stay consistent.)

Okay, are we all following along?

1) we live in a society where women are oppressed and silenced by male dominance, and where the sexual objectification is pervasive and normalized.

2) brilliant scientist who made history is forced by feminist bullying to tearfully apologize to all the oppressed women of the world for offending them by wearing a shirt with pin-up girls on it.

But remember, kids. MEN are in charge. Male privilege and all that jazz. It's Dr. Taylor's privilege to apologize to all those subjugated females who don't like his choice of clothing, because the sexualization of women is wrong, wrong, WRONG, and never empowering, okay?

The backlash against the backlash against The Shirt has also come from the usual suspects--there was, understandably, a strong overlap with #GamerGate--a geek/nerd culture phenomenon populated by a lot of people who'd be more impressed by someone landing a probe on a comet than even the best feminist analysis of the oppressive implications of the guy's shirt. Some conservative publications, you know, those bastions of anti-sex rhetoric and "save yourself for marriage" sentiment, also came out against this tempest in a t-shirt, criticizing feminists for their hypocrisy and their bullying of someone who can only be called a "great man", and the relative harmlessness of a images of sexy women.

But apparently to feminists, sex-positivity is yet another gendered issue--gendered in the sense that it's permissible and empowering when women engage in it, but contemptible and malicious when men do. A woman's sexuality is a beautiful thing, right up until the first nanosecond a straight man gets turned on by it, dontcha know. Then the Sexualizing Male Gaze becomes just another tool of the Patriarchy to keep women Subjugated and all that.

She has every right to dress as sexy as she likes and it's liberating and empowering, until a straight dude comes along and appreciates it, at which point it becomes oppression and slavery. Add a man to the picture and you can turn anything into the oppression of women. It's the feminist way.

As for the bullying Dr. Taylor endured, well, he totally deserved it. He was practically begging for it! I mean, did you see what he was wearing? *cough* You don't wear something like that out in public and not expect to get negative or unwanted attention and all kinds of people shouting things at you. *coughcoughhackHAAAAHHHACKH!* If he didn't want to get attacked, he shouldn't have dressed like that.

At the same time, even some progressive voices--Ana Kasparian, who became downright feisty, comes to mind--voiced their objections to the feminist furore over The Evil Sexist Objectifying Woman-Subjugating Shirt.

And of course, there have been objectors to the objectors to the objectors to the objectionable shirt, most notably our old buddy David Futrelle, who seems to think it's somehow notable that many of the same geeks and nerds who care about feminist puritans like Anita Sarkeesian ruining their video games and comic books might actually have an opinion about The Shirt and its screeching feminist detractors. I mean, it's not like geeks and nerds totally geek out with copious nerdgasms over the kind of science Dr. Taylor does or anything. I bet they don't even know what a comet is, have never even heard of Neil Degrasse Tyson, and they probably think science fiction is pulp trash. And it's not like they haven't seen the very same vilification of males and male sexuality promoted by feminists in their own spheres of interest. Because that just doesn't happen. Feminists would NEVER do that, because as we all know, "misandry don't real."

Which brings me to the other shirt in this tale. And I suppose its wearer can be lauded for not engaging in the sexualization of either herself or those her shirt refers to:

And, according to feminists, it isn't sexist, either. And here we come to the rub, as it were. Because to feminists, a straight man finding the idealized female form sexy, and expressing that, is sexist. But a woman, one with a weekly column in a major online newspaper, one whose book, Full Frontal Feminism, is considered a pioneering work of third wave feminism, one who has appeared on countless news programs, such a woman celebrating the suffering of an entire gender class is NOT sexist. It's not sexist because we live in an oppressive, male-dominated patriarchy that subjugates women.

The same oppressive, male-dominated patriarchy that subjugates women that recently browbeat and harangued one of the most important scientists in living memory into tearfully apologizing in front of news cameras because a handful of perpetually offended, professional umbrage-taking feminists found it offensive to women.

Dr. Taylor? For your next stunning accomplishment, do you think you could stop the world? Because I'd like to get off.

And in case anyone was wondering, an official Matt Taylor #ShirtStorm shirt (or a reasonable facsimile of) can be purchased here:

I won't be buying one, but in honor of the occasion I might just invest in a new SNFU tailored ladies' T to replace my 25 year old beaten up unisex one...

Posted by girlwriteswhat at 11:30