As it has done annually for the past few years, Time magazine recently ran a poll asking readers what words they'd like to see stricken from the cultural lexicon. In years past, successful contenders were "YOLO", "OMG" and "twerk".

This year's winner by a billion miles, earning 3 times as many votes as its runner-up, was the word "feminist".

In contextualizing the inclusion of this particular word, Time wrote:

“You have nothing against feminism itself, but when did it become a thing that every celebrity had to state their position on whether this word applies to them, like some politician declaring a party? Let’s stick to the issues and quit throwing this label around like ticker tape at a Susan B. Anthony parade.”

Why, it's almost like feminists are unable to read or something, since they seem to have failed to absorb the first sentence of the disclaimer, which flat-out states, "you have nothing against feminism itself, but..."

For myself, I voted to "ban feminist" when I stumbled across the poll, and I too am guilty of disregarding that initial clause in the description. In fact, I was forced to disregard the entirety of it, because I disagree with the entirety of it. I do have something against feminism--many many somethings, in fact, which I will itemize further on. And, as I happen to have something(s) against feminism, I am fully in favor of celebrities openly stating their political position in favor of or against it, the same way I'd prefer to know if that thing slithering amongst the pole beans in my garden is a harmless garter snake or something more sinister.

But the disclaimer itself, clearly stating agreement with feminism's principles (such as they are purported to be) and its goals (however dubious), but rather an objection to its irresponsible use in media, ought to have served to defuse any feminist wrath over the inclusion of the word in the poll. That it did not speaks volumes about feminism and feminists. As did the poll results, and the desperate attempts by feminists to blame the entire debacle on that cesspit of white straight male privilege known as 4chan.

In fact, the feminist response to the poll only serves to reinforce all the reasons I myself voted to "ban" it (as if words can or should actually be banned, and as if I would desire that). To make it clear, given the way the poll was set up to allow multiple votes, and even given my decidedly anti-feminist views, I only cast one vote myself.

So, some of my objections to feminism include:

1) it cannot handle challenge or criticism of itself, or its premises, goals and assumptions.

I think the reaction by many feminists to the poll proves this point better than any anti-feminist ever could. After all, the justification provided by Time explicitly excluded disagreement with feminism, and specifically stipulated disagreement with the irresponsible use of it in a celebrity context.

2) it is populated by bullies who react with coercive tactics to any challenge (or even skepticism) of its precepts, or criticism of its followers' behavior.

Forcing an apology and retraction from Time for daring to include the word "feminist" demonstrates this tendency quite neatly. Step out of line, and you'd better issue a tearful apology or next week you could find yourself at a soup kitchen or applying for jobs at McD's.

3) it is based on emotional reasoning, delusions of persecution and projection of ill intent. Never attribute a charitable or individuated intention to anything a man (or the system) does when a malicious and collective one can be applied.

“...rape is nothing more or less than a conscious process by which all men keep all women in a state of fear.” Susan Brownmiller.

Despite the explicitly stated justification of "feminist"'s inclusion in the poll, the reaction was that the intention was profoundly different from what was stated. Just as heterosexual intercourse, the means by which all sexually reproducing species procreate, is not a simple biological reality but a conspiracy to subjugate women, and just as the reprehensible criminal act of a single rapist is not the act of a (typically damaged and dysfunctional) individual but a conscious collective effort on the part of all men to terrorize all women, this poll (and its result) was much more than a mere expression of cultural exhaustion to the constant demands that celebrities "pick a side" or justify their ambivalence or opposition to the feminist position. It is nothing more or less than a conscious effort to undermine feminism and reverse the gains women/feminists have made.

While I would assume that many who voted for "feminist" did so not because of the justification provided, but because they view feminism as an unhealthy, divisive and damaging ideology, none of this points to any popular view that women are or should be considered inferior, or that anyone wants to "turn back the clock".

4) if there's a man around, blame him and his misogyny, or the misogyny of the "male-dominated patriarchy". Whatever you do, don't engage in self-examination.

4chan is, as far as I know, predominantly male. Regardless of the actual demographic breakdown, it is perceived as a male space, and one that is hostile to women.

Despite numerous opportunities over the last few years for feminists to critically examine the behavior of their sisters, to reconsider their claims and their rhetoric, to adjust their beliefs and consider evidence that challenges them, whenever someone (or a bunch of someones) expresses dissatisfaction with or criticism of feminism, the go-to response is to shift the blame onto men and their misogyny.

#notyourshield is allegedly nothing but white, straight men creating sock puppet accounts to spew hatred of women, or marginalized "Uncle Tom's" who've internalized the misogyny and racism of the white, straight male-dominated culture. It couldn't possibly be that many women and minorities are sick to death of feminism's divisive and polarizing rhetoric and tactics.

Paul Elam's article, a clearly stated satirical work written to highlight Jezebel's genuine and febrile celebration of female-on-male intimate partner violence, is proof that he's not only a misogynist, but a misogynist who promotes male violence against women. (There are simply too many feminist references to this particular article, with the intention of vilifying Elam, AVoiceforMen.com, and all MRAs, to link to.)

Need I say more? In the last week, a genius who landed a space probe on a goddamn comet was bullied into a tearful apology over him wearing a shirt that was no more offensive than this one: 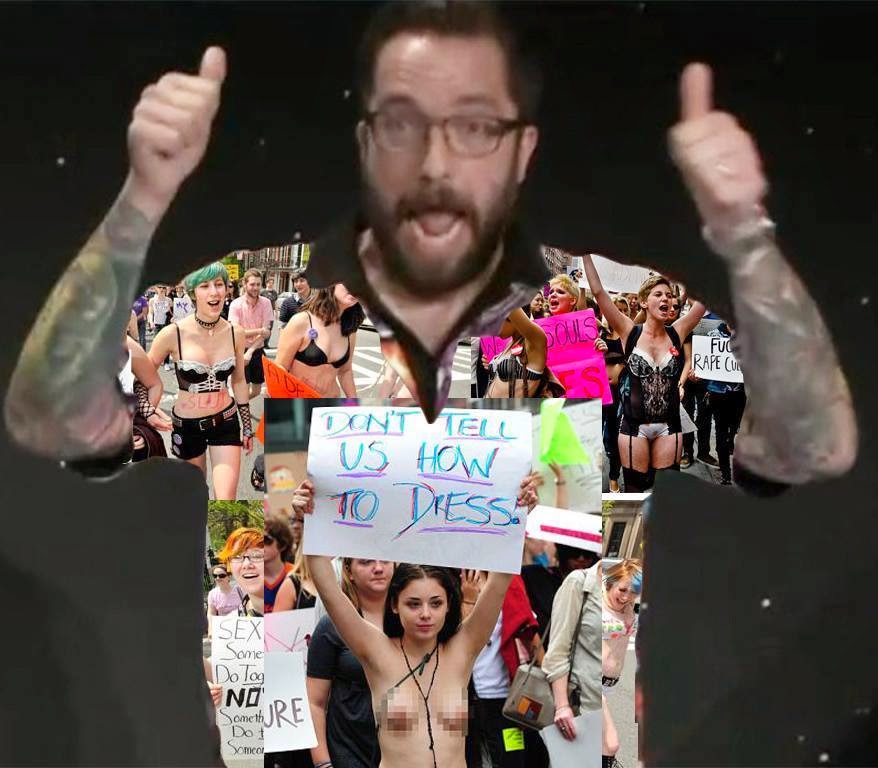 A month or so ago, a major news site, Forbes, was bullied into firing William Frezza over an article in which he expressed concern over the liability university men face when drunk women knock on the frat house door. The number of men who've been forced to step down from prominent positions because they offended feminist sensibilities (even, or perhaps especially, when their claims were backed up by evidence) are too copious to mention.

And here we see Time backing down from its moderate stance, due to the authoritarian leanings of feminist activists who will brook no questioning.

Without even going into my objections to the problems inherent to feminist doctrine, which I contend are unfalsifiable, biased, evidence-resistant and wrong-headed, and only concentrating on their tactics, feminists themselves have managed to reinforce every one of my opinions with their response to the Time poll. They have only served to bolster my anti-feminism, and demonstrate the very reasons why so many people voted to ban the word "feminist".

Here's hoping they keep up the good work.

Posted by girlwriteswhat at 09:40